Wow! It’s been 20 years! On May 9, 2001, the world premiere of Moulin Rouge took place at the Cannes Film Festival, leaving everyone with an air of curiosity to find out what new filmmaker Baz Luhrmann has brought to a genre that began many years ago. many years with Alan Crosland’s O Cantor of Jazz, in 1927, with Al Jolson, who also ushered in the era of talking movies.

The movie had several curiosities that we later learned, such as: the fractured ribs of Nicole Kidman (the protagonist), the very expensive necklace she wore in one of the scenes (one of the most expensive jewelry worn by an actress in a film), the hours for the complete assembly of certain costumes like that of the British actor Jim Broadbent who plays the character of Harold Zidler. Among other curiosities.

As a tribute, here in this article, we’ll be looking for arguments as to why this film lives in the hearts of many moviegoers and moviegoers to this day.

Dynamic, objective, exciting, creative: the magician’s counterpoint to the tragic

Baz Luhrmann brought to the cinema a work that speaks of love in a context of other centuries, within the bohemian and questions that accumulate on social class. Moulin Rouge has a meticulous, funny, awkward, passionate narrator who turns feelings into words. Following the motto: “The great thing you will learn in life is to love,” we witness the magician’s counterpoint to the tragic in Paris almost in 1900. Winner of two Oscars in all eight categories, he also been nominated, nominated for the Palme d’Or at Cannes in 2001, with Nicole Kidman and Ewan McGregor.

In the plot, we meet the dreamer Christian (Ewan McGregor), a man who has spent his entire life arguing with his father over matters of emotion and especially love. One day he decides to leave his family and go to Paris, excited by the discovery of the bohemian place, suitable for a future writer, his big dream. In this place there is the Moulin Rouge, a nightclub, a disco, a concert hall, a brothel. Fascinated, he ends up being carried away by the greatest of feelings, love, when he meets the sparkling diamond, the great star of the place, Satine (Nicole Kidman). But nothing will be easy for these mad lovebirds, they will have to face the mistrust of square owner Harold Zidler (Jim Broadbent) and another suitor to win the heart of the lady, the Duke (Richard Roxburgh).

You can think of this movie from different angles.

Beauty, freedom, love! A clash of classes in the same place. Rich, powerful, simple hard workers who earn little, all in search of the pleasures of this place; the environment, bohemian stronghold, of the search for freedom of expression with cries of revolution, greed from Zidler’s point of view; the arrogance of the duke and finally on the convoluted lines of a forbidden love story which takes on grandiose airs through dancing songs, so many adaptations which fill each space in the art of making vibrate the spectator. 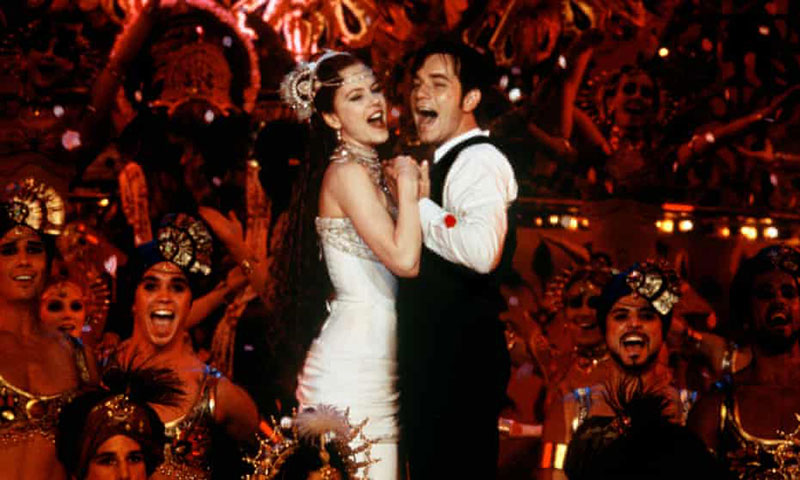 About this musical part, the project seeks to express feelings for the songs, which are great, by the way, even the classic Your Song by Elton John gets a nice version. Even the tango takes up space, in The Police’s song Roxanne with a startling hoarseness coupled. There is still time to refer to big names in the history of music such as: U2, Madonna, David Bowie and many more. A demonstration of creativity and courage.

Tragedy and flirtation with love, as in many classics

What would be the voice of the children of the revolution? As in classic tales of literature, tragedy flirts with love. The practically immature dreamer of life and a courtesan pays for the men to have fun. The clash between these two worlds becomes the frequent climax, within an imaginative universe, in passages of arcs that sometimes look like video clips but always win our hearts.

Here at Cinepop we even had this year in our Cinephile Court a debate on this film. It was a wonderful chat that you can follow on our Youtube channel.