Without a doubt, the battleship Potemkin is still the staple work of Russian cinema

The turn from the 19th to the 20th century was not easy for Russia. If the policy of the country follows the monarchical model, it is already in decline at the turn of the century, under the leadership of the Tsar; its economy lagged behind the rest of Europe. The Russian Empire was still very timid in terms of industrialization, and its economy was heavily dependent on agrarian labor spread over the vast territory.

The campaign, moreover, was the epicenter of discontent with the state over the high fees charged by the crown. Episodes of revolt in these regions were not uncommon. In the towns where the few industrial centers were located, the situation of workers was characterized by extremely low wages and very high workloads. Apart from that, there was also the absence of labor laws, the criminalization of unions and the rapid and disorganized expansion of cities due to the great rural exodus that was taking place.

In the article The Transformation of Russia in the Nineteenth Century published by the United States Library of Congress, it is pointed out how problematic industrialization was in the country. “The country’s industrial growth has been significant, although unstable, and in absolute terms it has not been extensive…. the state budget had more than doubled, however, debt deliveries had quadrupled, constituting 28% of official expenditure in 1891 “. 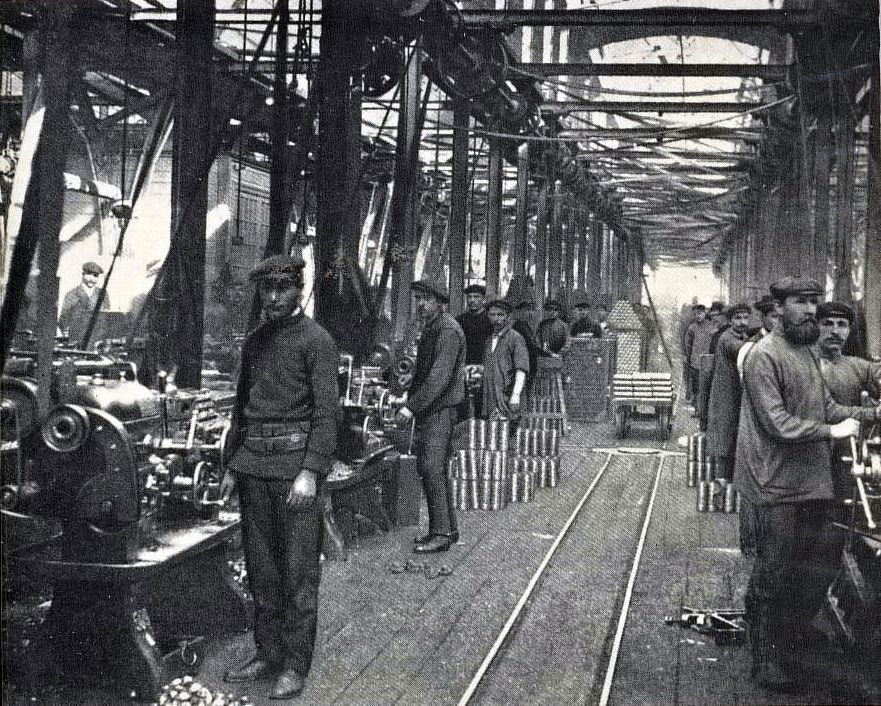 The slow pace of national industrialization has contributed to social upheaval

It is in this scenario of great economic and social instability that in 1905, a mutiny occurs on the battleship Potemkine; the most modern that the empire had until then. Richard Cavendish’s Mutiny on the Potemkin emphasizes that “it was not a happy ship and that part of the crew had revolutionary inclinations, especially a young non-commissioned officer named Matyushenko, who took on a leadership role. in what followed. “

The riot was triggered by the state of the food offered to the crew. It was said that the meat was infested with worms and that the soups contained worms; this situation further increased the indisposition of the crew, which was not well accepted by the ship’s captain. His response was to execute one of the complaining crew members, who Cavendish claimed was a man named Valenchuk, which caused the internal chaos to begin.

After the execution of the captain and the entire command corps, the internal committee was created to lead the Potemkin. The event then encouraged the people of Odessa, where the ship was anchored, to rebel against state institutions. Such was the crisis that Tsar Nicholas II authorized the use of extreme force to contain the uprisings, which left 2,000 dead and 3,000 injured. The Potemkin’s crew managed to leave port with the ship, later returned by Russian forces. 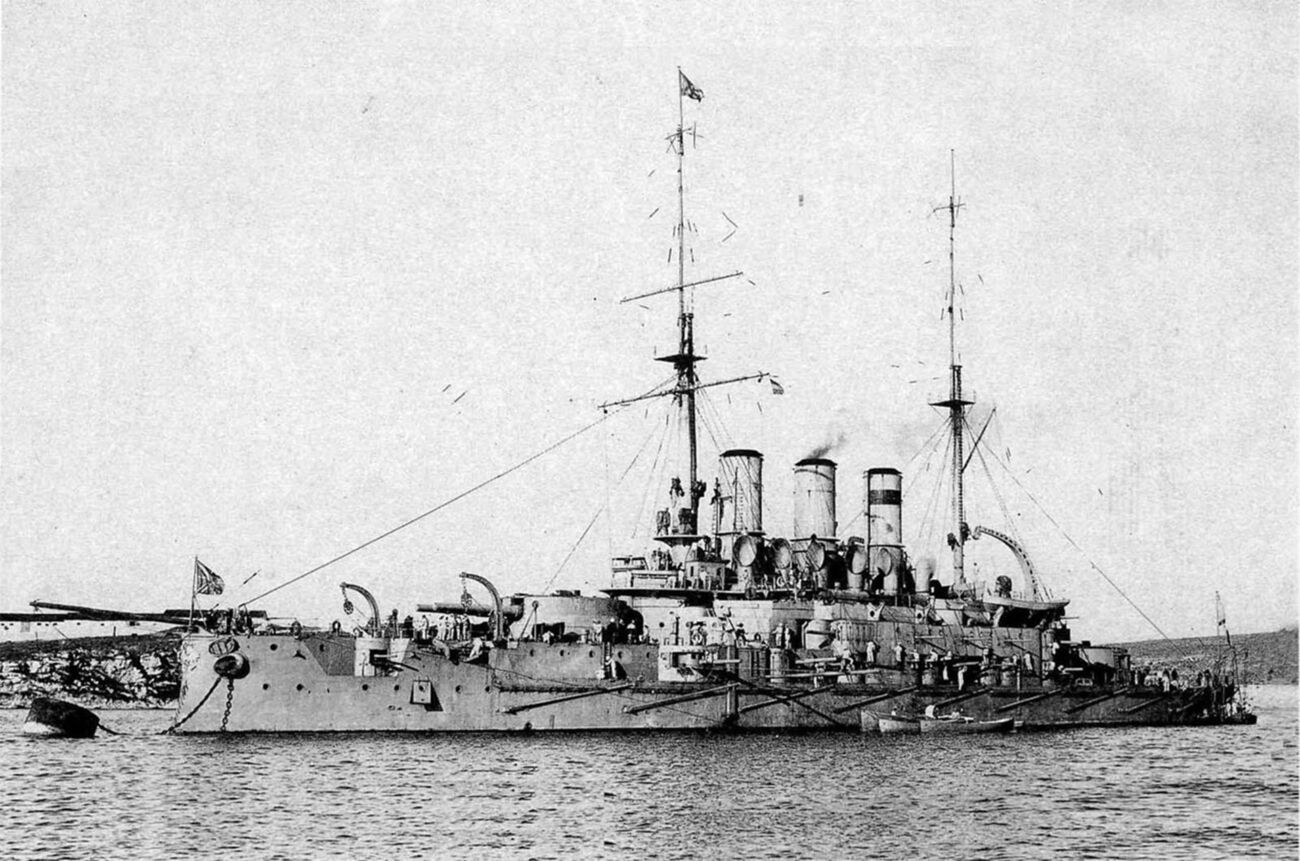 Years later, in 1925, with the country already converted to the Communist system of government, filmmaker Sergei Eisenstein shot the battleship Potemkin. The director was a strong supporter of the new regime and, above all, understood the innate potential of cinema as a means of consolidating the new ideology in the minds and hearts of the people (the Soviet Union was until then relatively new, with its existence formalized in 1922.).

In an excerpt from the book Tudo sober cinema, editor-in-chief Philip Kemp indicates precisely the target of the brochure for which the film was shot. “… This historical reconstruction by Sergei Eisenstein is the most famous of all Soviet silent films and also a masterful example of pamphlet cinema. In keeping with the film’s goal of demonstrating the power of the people over the divine authority of a monarch, characterization of the characters is less important than the actions of the masses ”.

The work was responsible for presenting the technical innovations of the time, mainly in visual terms. Narratively speaking, the film was divided into five chapters, the fourth being the most famous, known as “Odessa Staircase”. Eisenstein adapts the repression of security forces to the screen and visually innovates in doing so; mainly because of the number of stories happening at the same time. The action of the Imperial soldiers, the reaction of terror of the population, and the tension of a stroller that escapes the care of the mother and goes through the pandemonium all unfold simultaneously. 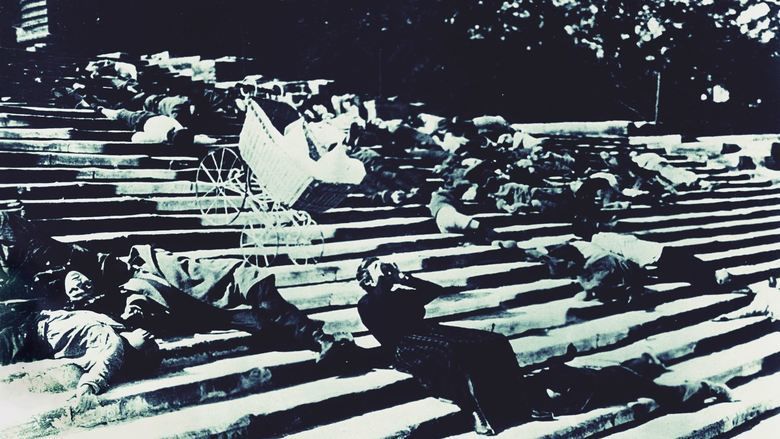 The classic scene of the Staircase Massacre in Odessa

In How This Soviet Propaganda Changed Cinema Forever by Varun Chaubey explains how the rhythmic decision of the scene, adopted by the director, made all the difference in the final sensation. “Rhythmic editing is used consistently throughout the film to maintain a natural flow between shots. Unlike time signature, where the focus of the shots is fixed, the pace of editing is based on the beat and time of the scene itself. So in “Escuela de Odessa”, the moment before the massacre seems very relaxing, then becomes more tense after the appearance of the Cossacks “.

Although technically recognized, Battleship Potemkin has long been viewed as an ideologically dangerous film, a sentiment that developed during the Cold War era. Its level of violence has made it published in several countries, with a whole sequence of excerpts that have been deleted. Its screening in Nazi Germany was banned, and when it was finally granted permission to screen in Britain, around 1957, the film received the highest indicative rating; over 18 years old.

However, the importance of the work is undeniable as well as its key position in Eisenstein’s filmography. Hollywood has learned a lot from the Russian director’s techniques used in the film, especially when it comes to telling historical facts in a fictional way, potentiating events, and establishing archetypes for those involved. . After ninety-five years, the film has matured: it is no longer a work for purely propagandistic purposes and has become a “teacher” for all cinematographic works that will come later.