The Brazilian publishing market has been turbulent in recent days due to a Twitter thread involving readers from different parts of Brazil and one of the country’s largest publishing groups, the Record Group, which marks this year its 80th birthday. The same week the publisher received statuettes from the country’s most important literary prize – the Jabuti Prize – online, some bullshit unfolded that ended up having international repercussions.

It all started, in fact, on another thread in the same social network, where readers were (again) debating the authorization and legality of book piracy. So, one of the editors of the Galera Record label – young adult label of the publishing group, responsible for releasing huge global bestsellers that have already or will become series and films, like Eoin Colfer (‘Artemis Fowl ‘), David Levithan (‘ Dash & Lily ‘), Cassandra Clare (‘ City of Bones’), among others – decided to speak up, saying she would not comment on anything and that she just followed quietly. But then a disciple gave a hefty answer, comparing readers who pirate books to criminals, such as racists and rapists, saying that “every criminal has a justification, that’s right. The rapist didn’t want to rape. The racist didn’t want to kill. The thief has no money to buy. If there is a crime, someone is dressed ”. Everything could have ended there, with this distraught comment of the follower made in the personal profile of editor Rafaella Machado, of Galera Record, but Rafaella decided to speak, and replied “guilty hacking kkkk” , making an analogy with the judgment of businessman André Camargo, who alleged “culpable rape” in the accusation brought by blogger Mariana Ferrer. The tweet was deleted later today. 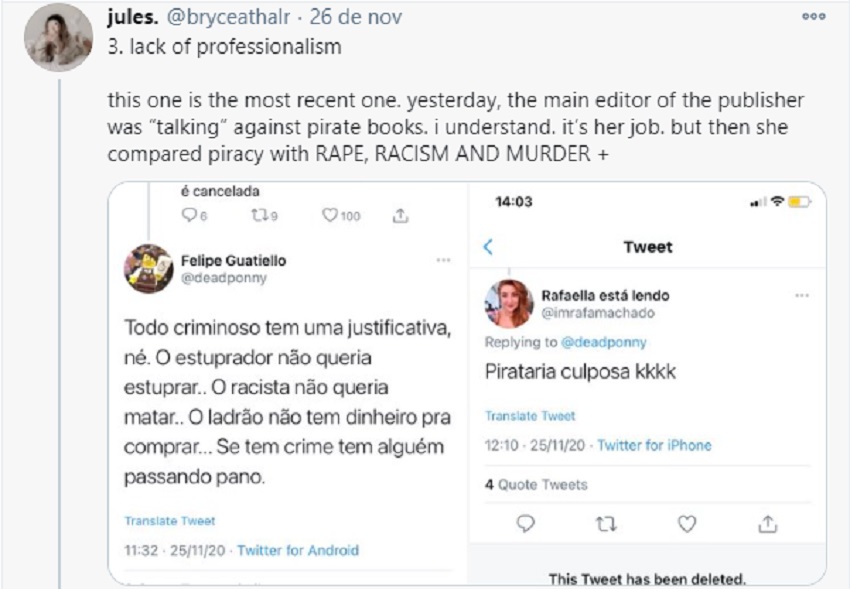 This was enough for the readers – already unhappy with the quality of the books produced by the label – to throw it all on the fan. Worse yet: on the Internet.

But there is an important detail in this story: Rafaella Machado, in addition to the publisher of the Galera Record label, is also one of the owners and heirs of the Editorial Record group.

Readers then joined a never-ending thread on Twitter and decided to translate their complaints into English and post everything on social media, asking people to retweet until the thread reached the “ears” of their favorite authors. . The list of complaints ranges from manufacturing defects (books with missing pages, duplicate chapters, badly cut pages or leftover paper, etc.); editing and layout errors (missing dashes leaving a space between words, etc.); revision errors (words printed in disagreement with VOLP – spelling vocabulary in Portuguese); and the most serious: translation errors. All the shit can be read here:
https://twitter.com/bryceathalr/status/1332021977599647745

Specifically, about such translation errors it gets a bit more serious and can even be interpreted as racism and homophobia. Readers give examples by comparing the same book side by side, in English and Portuguese, in which in the English original of the fantastic book “Cidade da Lua Crescente”, by writer Sarah J. Maas can be read “But it doesn’t keep him from sneaking around for a good twenty minutes with a broad-breasted Fae who took on dark brown skin, exquisite face and black curly hair ”, but in Portuguese it became “But that didn’t stop her from sneaking around with a muscular male fae, enchanted by his caramel skin, his exquisite face, his black curly hair.” Although “dark brown skin” should be translated as “dark brown skin,” the published book opted for the “caramel color” alternative, thereby whitening the character’s complexion. 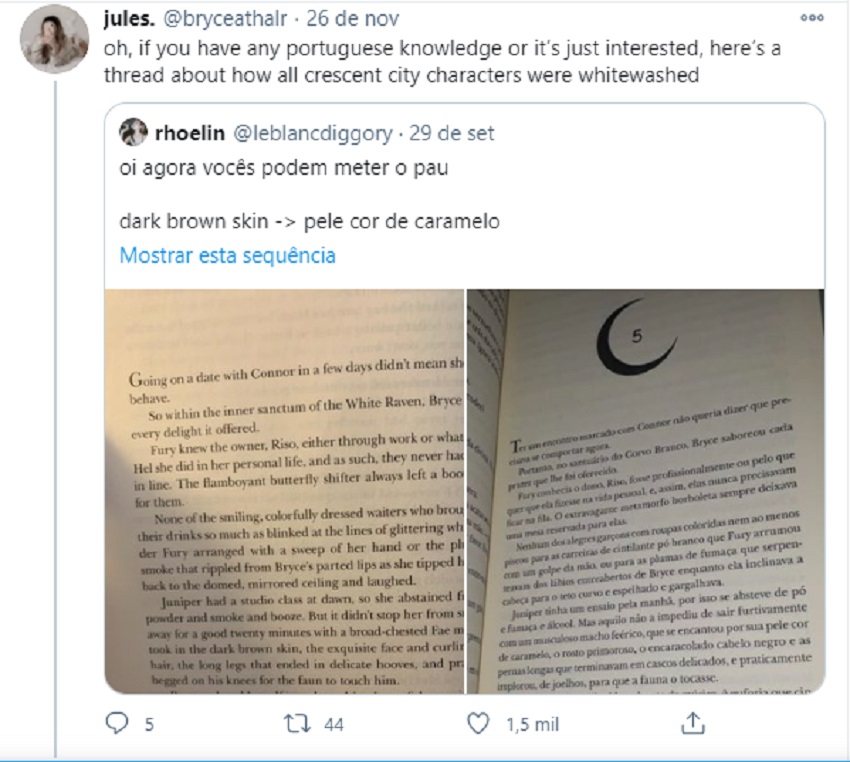 To better understand how the editing process works, even if the translator of the book used this term in his translated file, the text always goes through at least one proofreader (sometimes three), whose function is precisely to observe whether the terms chosen correspond in the original language, if the spelling is correct, if there are typos, etc. After the revision, the final text must pass to the editor, who must read the final file for publication, and, giving his agreement (upon publication), the editor is responsible, in this way, for the product sent to the market. What happens in practice, in many editors, is that the translator has a minimum time to translate (always for yesterday, it is almost never possible to proofread what is done), the proofreader just looks around of him, trusting the competence of the translator, and the publisher is hardly ever able to read the book before it is published. And production times are getting shorter, as fans want releases at the same time the books are released overseas, and to minimize the risk of piracy, publishers end up shortening editorial production time – this which consequently, it increases the chances of printing errors, after all, haste is the enemy of perfection.

In another case, a reader points to the fact that in another book – from the franchise ‘Os Mortals Instruments’, by Cassandra Clare, who already came to Brazil at the São Paulo Book Biennial, presented by Record itself in partnership with the event – a vampire named Raphael changed his sexuality – from asexual to straight. In the original, it says “I’m not gay,” Raphael said. “I’m not straight. I am not interested “and in the book in Portuguese the reader finds” I am not gay – says Raphael. – I’m straight. I am not interested “. Whether the omission of the word “no” from the final translation was a mistake or a choice, it is not known, but not including that word in the book transformed the whole meaning of the text for fans. 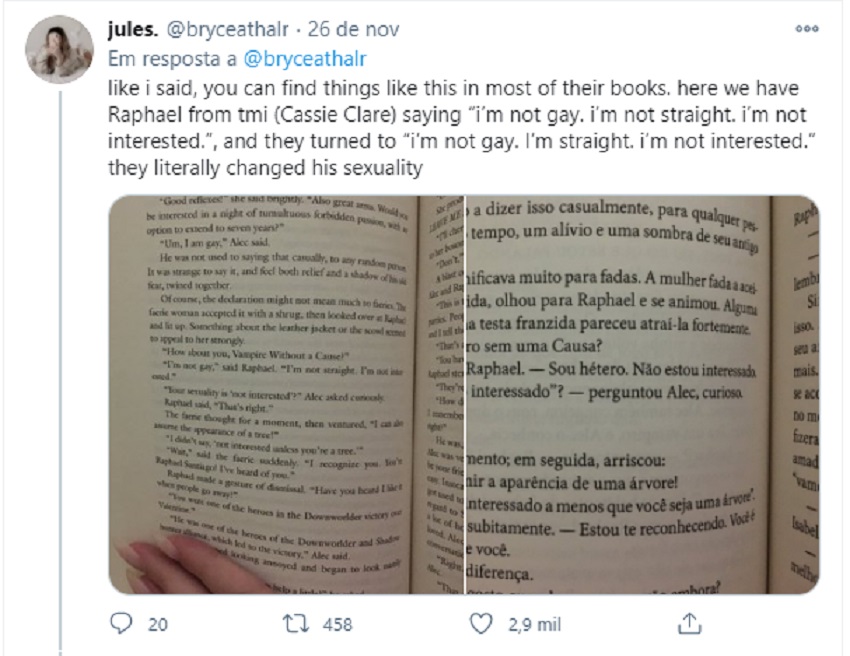 The list of reader complaints, entirely in English, has grown so strong that already on Thursday some authors began to come forward on social networks, such as Angie Thomas (“ The Hate You Sow ”) and Colleen Hoover (“ It’s Like This’ ‘Que Acaba’), and although it was a Thanksgiving holiday in the United States, they said they were disappointed with the quality of the books offered by the publisher and that they would contact their agents to make the decisions. appropriate, thanking readers for alerting them. them on what happened. 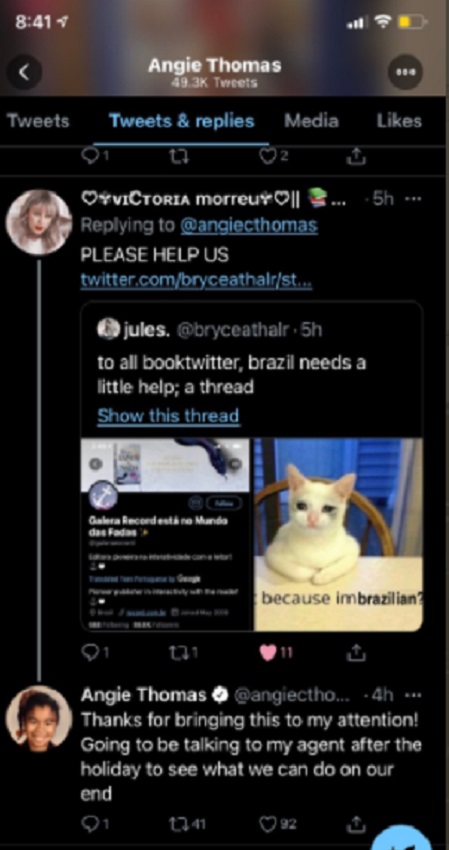 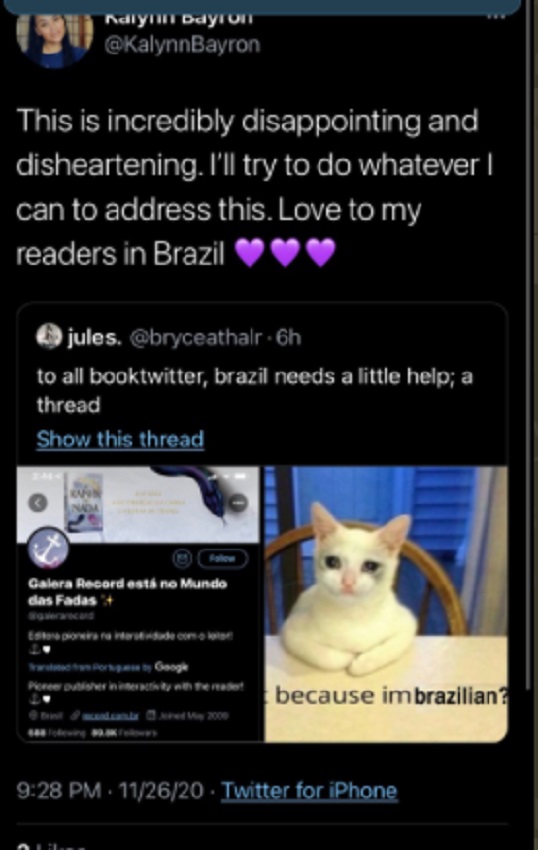 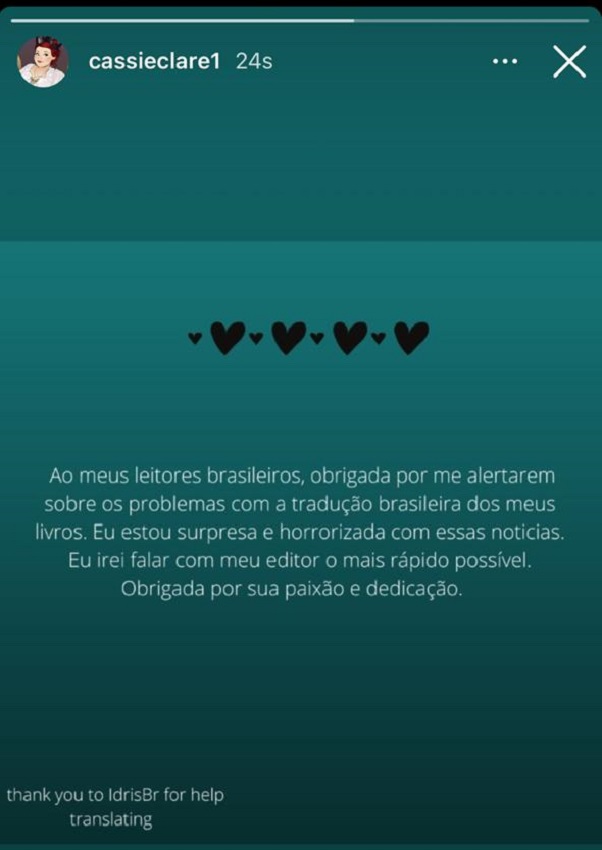 Over the next two days, the thread only gained momentum in the editorial world, to the point that this Saturday Galera Record showed up on Twitter, saying it was open to reader’s demands and apologizing for the posture of the editor in his personal profile. . Additionally, the publisher announced that they have sent the translation of “ City of the Crescent Moon ” for expert sensitive reading (sensitive reading is when the text is submitted to someone who has a life or social experience. on a particular topic, to find out whether the terms, opinions or episodes told in a text are consistent with reality or offended by a particular social group) and that from now on you are not just subjecting all your translations to sensitive reading by specialists, but also examine the translations of the old editions. The full statement can be read here: https://twitter.com/galerarecord/status/1332716181237665792?s=19

While this feedback from the publisher Galera Record has been conscious and ripe – after all, we are all learning and changing, and the role of a publisher is, above all, to educate readers – l magnitude of the impact that this tread does not yet know. not only in the publication of these bestsellers in Brazil, but in the editorial environment as a whole, since the label is responsible for the publication of most of the books of literature for young people and young adults in the country. 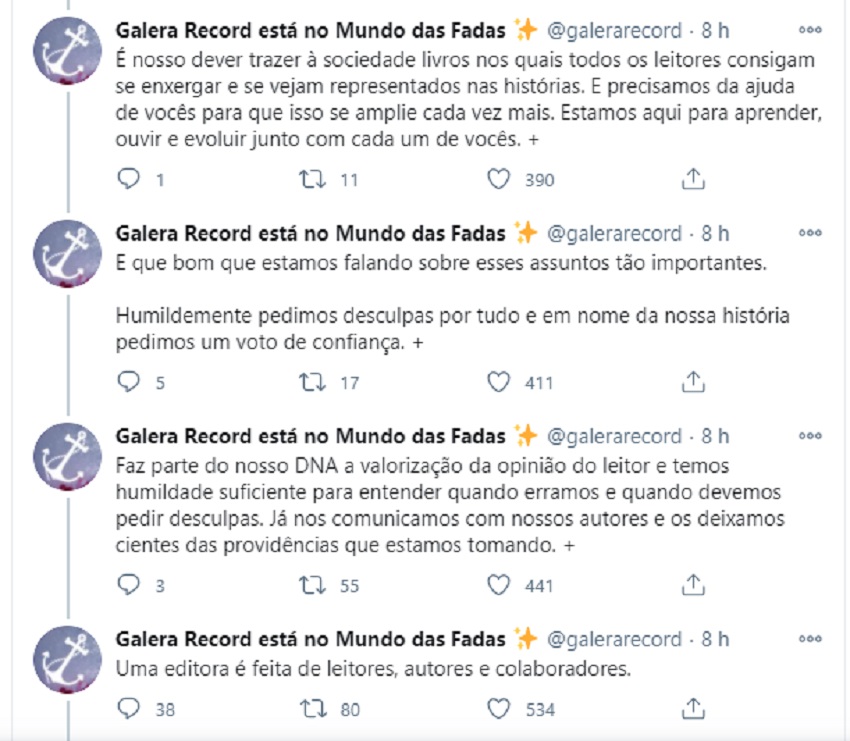