Released in 1999, the best year in movie history, ‘The Matrix’ revolutionized the Hollywood industry and our minds. With innovative and extremely interesting ideas, the film planted a seed in our heads about what reality is and how we might be manipulated by machines. Metaphorically, this has turned out to be a big reality these days with fake news and social media “bots”. ‘Matrix’, the original, has never been so topical. So why not do another one?

As Hollywood is poised to recycle old franchises, whether through sequels, remakes, or reboots, it didn’t take long for “Matrix Resurrections” to be announced through an idea that Lana Wachowski had it after the death of her parents. And she decided to return to this universe without her sister Lilly, who did not want to embark on this journey.

“Matrix Reloaded” caused a stir upon its theatrical release, and while it disappointed some fans, it presented ambitious ideas through clever dialogue – like the scenes with the Oracle and the Architect – as well as innovative special effects, particularly within the ‘Matrix’ universe. The scene of Neo’s fights on the stairs, the escape down the freeway with the twins, and the clash against multiple Agent Smiths all made history. Behold, the franchise seemed to have ended with ‘Revolutions,’ which received a cold reception from critics and audiences alike, and didn’t answer any of the philosophical questions posed in the previous film.

‘Matrix Resurrections’ starts from a completely new idea, but nothing new. It’s a film that has no visual connection to the original trilogy, as the photography and color scheme are quite different. The greenish filter that marked the original trilogy gives way to a bluish tone – and, from the start, the work is constructed like a “bastard child”.

Almost everything is different here: it’s a more comical and less serious tale than the previous ones, with a much more intimate scale and a story that brings good discussions, but not at all original. It’s a “dynamic blockbuster,” one of those fun movies to watch but quickly throw away.

Using metalanguage, the story re-presents Neo in the Matrix as a successful game developer set to make sequels for the franchise he launched years ago. While looking worried at the idea, he also begins to realize that something is strange and has no place there.

To find out if his reality is a physical or mental construct, Mr. Anderson (Neo’s adopted alter-ego), will have to choose to follow the White Rabbit once again. If he has learned anything, it is that this choice, although an illusion, remains the only way out – or to enter – into the Matrix. Neo already knows what to do, but what he doesn’t know is that the Matrix is ​​stronger, safer, and more dangerous than ever.

The film is self-referential, managing to blend the past with the present in an empowering way, as it makes peace with modern blockbusters and offers a fun stir – but without too many ingredients. The saga has been copied so much in theaters that it now looks like a copy of itself. At least ‘Resurrections’ has been that way from the start, bringing a quirky vibe. It’s weird and absurd at times, but it’s fun and there are some inspiring moments filled with cool ideas. 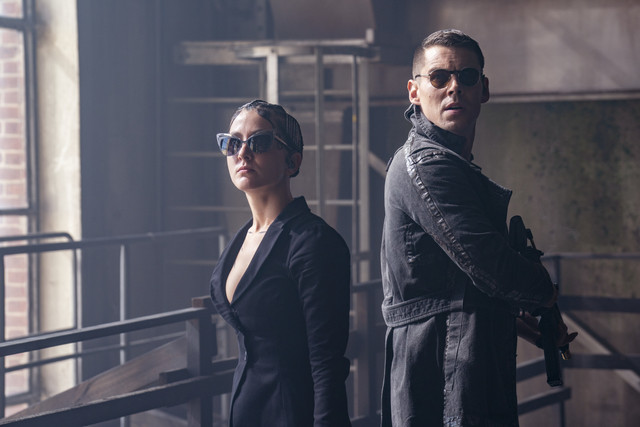 The franchise was known for its “jaw-dropping” action scenes that were hugely revolutionized and copied to exhaustion by other films. Now we have action scenes that are still well crafted and satisfying, but generic and less punchy. There is nothing that hasn’t been seen in other similar works this year, and it can be a bit of a letdown. Even the special effects are not that great. But after all, is it still possible to revolutionize cinema? If the answer is yes, it won’t be this time that we find out.

The main strong point of the production remains its casting. Keanu Reeves is back as Neo, and although he retains his “John Wick” look, he is more comfortable in his character. However, who shines now is Carrie Anne-Moss. The actress gains even more visibility as Trinity and becomes the soul of the film. The chemistry between the two is greater than ever and the film really works like a timeless love story. It is the most expensive romantic production in cinema. Other names worth mentioning are Jonathan Groff, Jessica Henwick and Neil Patrick Harris.

Lana Wachowski revisits the universe she created in a way beyond difference, which will polarize opinions to be precisely a blockbuster out of the box, bringing in a much smaller and less pretentious story. It’s both refreshing and disappointing, as it could be something grander and more innovative. There are some relevant ideas that will make you think, just like the original trilogy, but it’s forgettable. The film is finally reaching its last moments, with fan service that will drive fans crazy, but there is a long way to go to get there. Is the Matrix trying to make us forget about itself? The doubt remains.