Have you ever wondered what a James Bond 007 movie would look like if it was a comedy? What’s more, what if you didn’t have one, but several actors, including women, playing James Bond? Well, don’t think about it anymore, because this movie exists and is called Casino Royale! No, this is not the Daniel Craig blockbuster released in 2006. It is a work released at the height of the 007 film franchise’s popularity, starring Sean Connery. Check it out below and learn all the details of this curious and bizarre story involving the biggest spy in cinema. 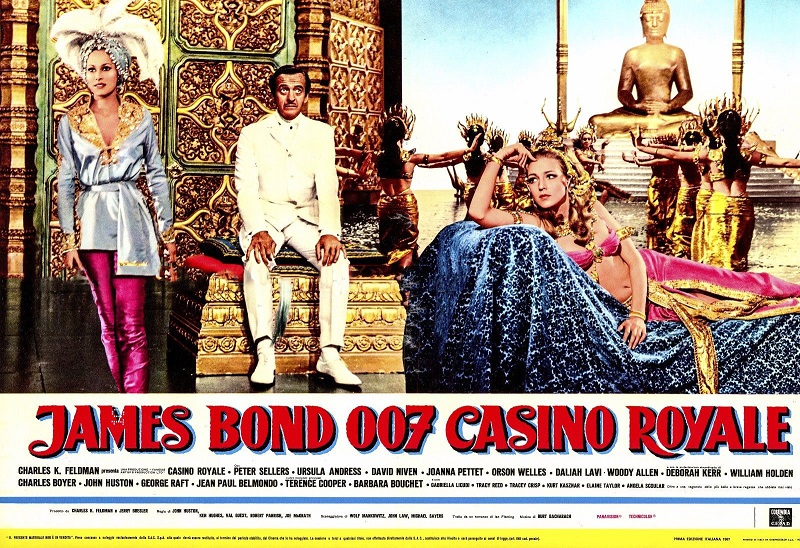 Let’s start with the beginning. Do you know how Marvel sold the rights to some of its characters to studios like Sony (Spider-Man), Fox (X-Men), and Universal (Hulk) in the past? Well, author Ian Fleming, creator of 007, followed the same path by selling the rights to some of his books to various Hollywood producers, until he signed an exclusive deal with EON Pictures, executives Albert R. Broccoli and Harry Saltzman – considered the official canonical franchise character. Among the books to which EON did not own the rights were Cassiono Royale, the first written by the author, and Thunderball (The Atomic Blackmail), the ninth book.

This second, Atomic Blackmail (which I spoke about in the last column of this series of stories), was purchased by producer Kevin McClory, who made a deal with EON to produce the film with Sean Connery. The film has become the franchise’s biggest hit so far and one of the biggest overall, but that would give official producers headaches later – a topic we’ll cover in another article by series. On the other hand, Casino Royale was bought by producer Charles Feldman, who would produce it through Columbia Pictures / now Sony. And for a while, there were even plans to make a serious movie, like the rest of the franchise, and even have Sean Connery outside of EON / MGM.

Given the growing number of 007 clones on TV and especially in movies, some even creating their own franchises, like US agent Matt Helm (Dean Martin), and realizing that Connery’s $ 1million salary was out. of question, the directors had the chance (even good for the time) to make a great parody of the 007 films. And for that they had one of the best castings of the time in the cinema and definitely the best of the films of James Bond; no less than five different directors; and at least ten screenwriters giving a pep talk to the text. In the room of the filmmakers in charge of the work: Val Guest, Ken Hughes, Joseph McGrath, Robert Parrish and the most famous of the lot, John Huston, winner of two Oscars.

The production of Casino Royale makes a documentary in its own right, and in part it turned out to be a nightmare. The film is episodic and takes place in several parts, without some of the great actors who are part of the cast even meeting each other. Therefore, I will try to make the most of what Casino Royale is below in the items in the next column. 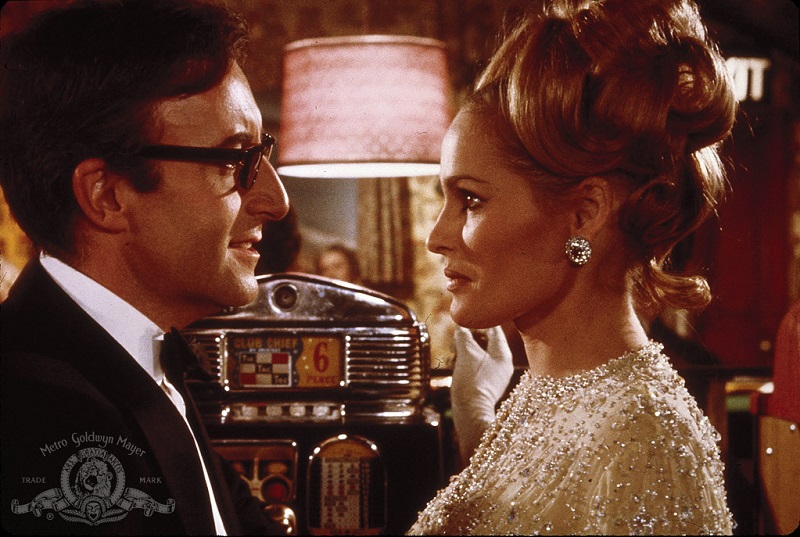 Problem “boy” Peter Sellers wanted to be the real 007 and is playing the role of Ursula Andress.

As said, here we have not one, but several actors playing the biggest spy in cinema, James Bond. Let’s start with the iconic comedian Peter Sellers, immortalized by the figure of another lawyer, Inspector Jacques Closeau in the Pink Panther films. Like most comedians, Sellers wanted to be taken seriously and recognized for his talents as a dramatic actor. He’s even made some serious movies, and here his desire was to play James Bond the way Sean Connery did. So great was his disappointment when he found out it was a parody that he gradually boycotted the production with his erratic behavior, becoming a real problem behind the scenes.

In the film, Sellers doesn’t even play the real James Bond. This is Evelyn Tremble, hired to impersonate James Bond due to her talent with cards, and beating the villainous Le Chiffre at the game of baccarat. As can be seen, much of the original text (also found in the 2006 film) has been preserved here. The sellers injured Jacqueline Bisset, another scene, through a silly prank, assaulted one of her directors, and created an unbearable rivalry with Orson Welles behind the scenes to the point that her scenes had to be recorded separately. Oh yes, Welles, the great artist behind Citizen Kane, is also in the movie and plays Le Chiffre. It took a while, but Peter Sellers’ self-sabotage plan kicked in and the actor ended up being properly fired from production before completing all of his scenes. What happened, obviously, is seen in the end result, with its subplot ending inconsistently.

Thus, other James Bonds enter the scene. The original of the film is the stylish David Niven, also a veteran of the Pink Panther franchise. Niven was author Ian Fleming’s initial choice to play James Bond in the films. Fleming was even very disappointed and fought against the choice of Sean Connery then unknown. In any case, Niven had the opportunity to play a more mature Bond in this satire. Here there is one more joke with the character who is not a fan of violence, unmasking a forger who masquerades as him and causes a lot of destruction – that forger would be Connery.

Basically all of the film’s secret agents are called 007 – James Bond, a gag that was used repeatedly throughout the screening. A curiosity is that the beautiful British Joanna Pettet plays the daughter of James Bond (the real one, played by Niven) with the royal spy Mata Hari, known as Mata Bond. She gains a lot of prominence and commands one of the subplots, demonstrating a bit of what a 007 movie starring a woman would look like – it’s a movie that gives a taste of what it could be. 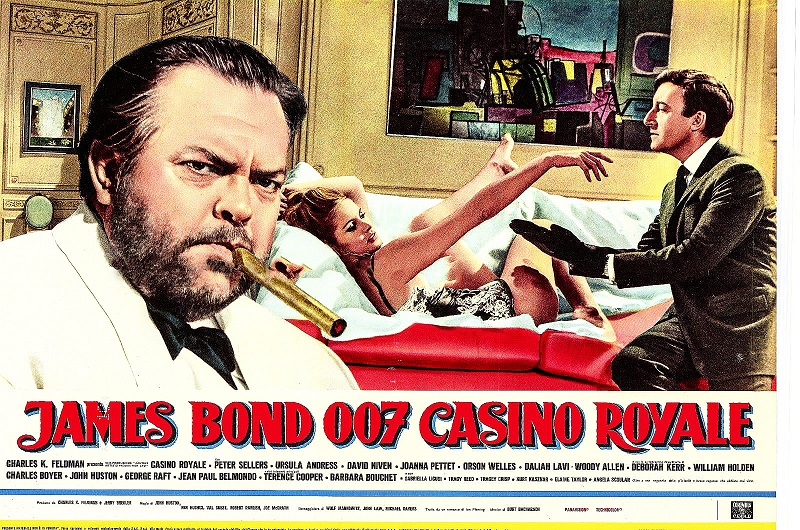 Orson Welles used all his charm in the role of Le Chiffre and engaged in a real duel with Peter Sellers.

As stated, the point here is a parody, just to try something new that the dozens of 007 clones haven’t tried yet. However, the narrative is fragmented into episodes that don’t connect. Closest to the story in the book is the segment with Peter Sellers fired in the card duel with Le Chiffre. The Mata Bond clip shows what could be a movie starring a 007 female, with the secret agent taking on the personality traits of her father and mother (including wearing quintessentially Indian outfits for her disguise). David Niven’s real James Bond, on the other hand, finds himself grappling with the comedic and absurd plot of his nephew Jimmy Bond, transformed into villainous Dr Noah (mocking Dr No) and romantically involved with his widow. dead boss, the classic Mr. 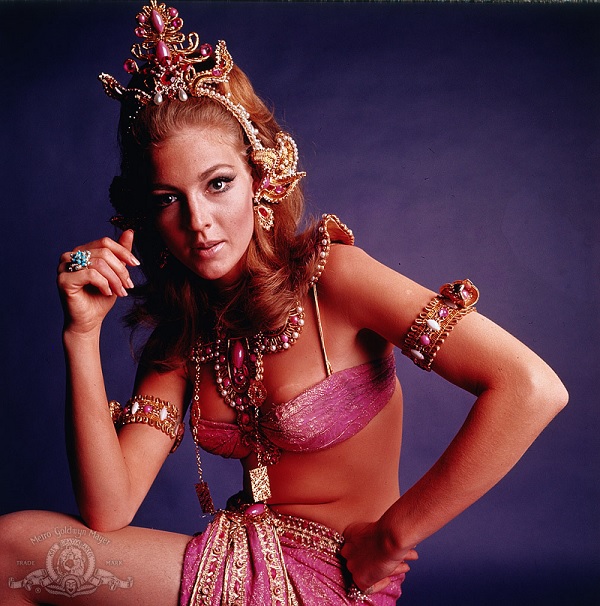 And if we have a lot of actors who live James Bond, the number of allies and Bondgirls is not left out. In addition to the film’s three Bonds, we also have Vesper Lynd, the same character played by Eva Green in the 2006 feature film, which would mark the character’s Craig era. Thus demonstrating even closer links with the original material. The curious thing here is that in this Casino Royale, Lynd is played by none other than Ursula Andress, the original Bondgirl of the franchise, who spawned the segment of such characters in The Satanic Dr. No (1962). Many of her scenes here, however, are inconsistent, thanks to the sacking of her co-star Peter Sellers. At least she used her original voice this time, instead of being dubbed like in Dr. No.

6 Oscar nominated star Deborah Kerr is also in attendance at Casino Royale. This is Lady Fiona, widow of James Bond boss M, played by director John Huston – also participating as an actor in the film. Palestinian Daliah Lavi is another agent who uses James Bond’s name in the film, and the feature film also features Oscar winner William Holden as Ransome. 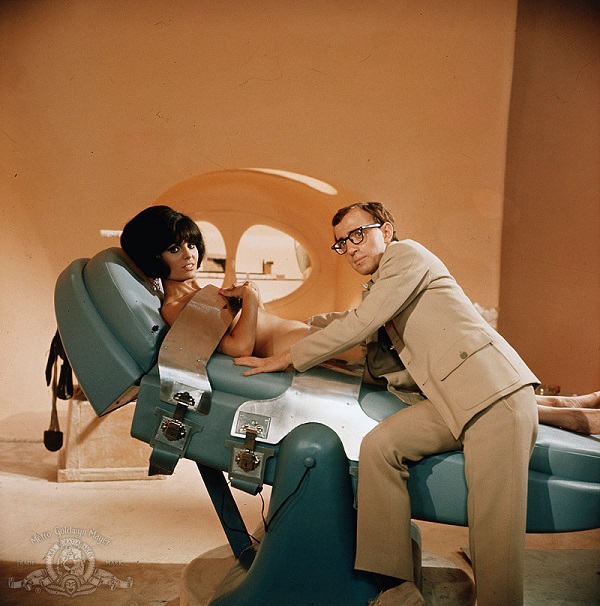 Woody Allen steals the show as the Jimmy Bond complex.

The main villain of the 1967 Casino Royale is Le Chiffre, as well as in the original short story and 2006 film adaptation. The one playing the big guy is the legendary Orson Welles, who lends all his charm and charisma to the role, demonstrating that he would make an excellent villain in the official franchise. His scenes had to be shot separately from Peter Sellers due to a rivalry between the two fueled by the self-righteous temper of Sellers, one of the most troubled stars to have been in Hollywood.

But Casino Royale uses another villain in its plot. The aforementioned Jimmy Bond, nephew of James Bond in the subplot with David Niven. And the character is played by none other than Woody Allen, at the start of his career, but who already stands out for his humor. Allen wrote part of the script and his scenes are by far the funniest in the movie. Now rebranded as the villainous Dr. Noah, Allen’s character aims to take out all the taller men from the planet and turn women into beauties. A complex villain at the highest level, playing with the megalomania of the enemies of the spy. 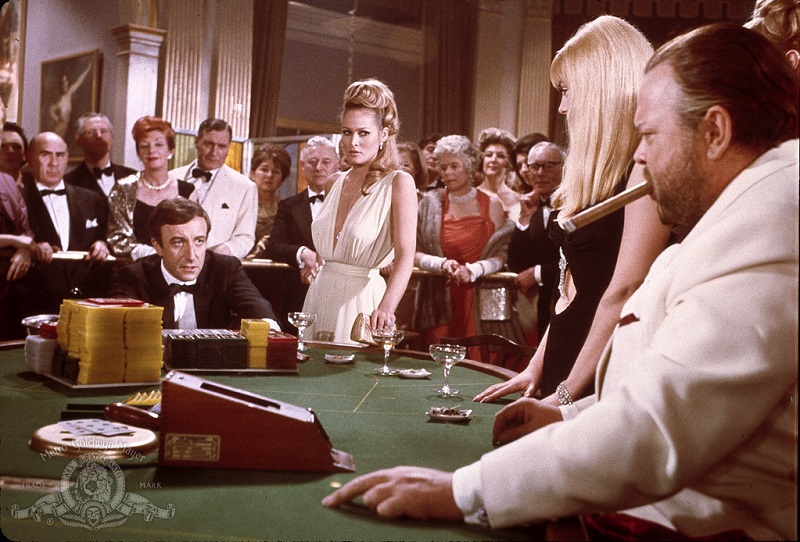 Casino Royale has given a lot of headaches thanks to ailing Peter Sellers.

One of the hottest productions of the 1960s, with many talents involved, Casino Royale was to be Columbia Pictures’ response to MGM’s success with the official franchise. However, not least due to the erratic behavior of Peter Sellers, one of the biggest names in the cast, much of the production ended up going off the rails, making it impossible to correct. Its subplot ends in a rambling and incoherent fashion. The filmmakers appeal to psychedelic content, typical of the era, but the hallucinogenic tone doesn’t help either.

The fault may have been largely the fault of the sellers, but not all. Like the other parts that the actor is not part of, they don’t work much either, despite the onslaught of comedians and directors. One of the biggest sins all of the pundits seem to agree on is that Casino Royale is beset by the worst evil that can happen to comedy – it’s just no fun. And it’s the kiss of death for films like that.

The bottom line was well below expectations, securing a box office failure for the film, to add to its mostly negative reviews. In any case, Casino Royale has lived to become a cult object, embraced by those who love to learn more about the history of the seventh art and its behind the scenes – alive to be considered one of Hollywood’s most problematic productions.