As comic book fans already know, dying in a story doesn’t mean a character will be cast forever, as many of them have already been resurrected multiple times.

However, this strategy ends up becoming something irritating to the fans and even the directors responsible for the film adaptations.

As is the case with James Gunn (“Guardians of the Galaxy”).

On his Twitter profile, the filmmaker spoke to a fan and made it clear that he hates killing a character and having to bring them back in a sequence.

“Have you ever worried that the resurrections of dead characters will negate the consequences or risky elements of the story? Gotham, for example, which I had fun watching, killed and resurrected characters multiple times and I really stopped caring about any of them, ”the fan said.

“Yeah, I care about that. To me, there’s a difference between really big deaths and supposed deaths that serve as twists and turns, where someone SEEMS to die and then doesn’t die. But if you define this death – like Yondu or Tony Stark – it’s a flawed narrative to bring them back. 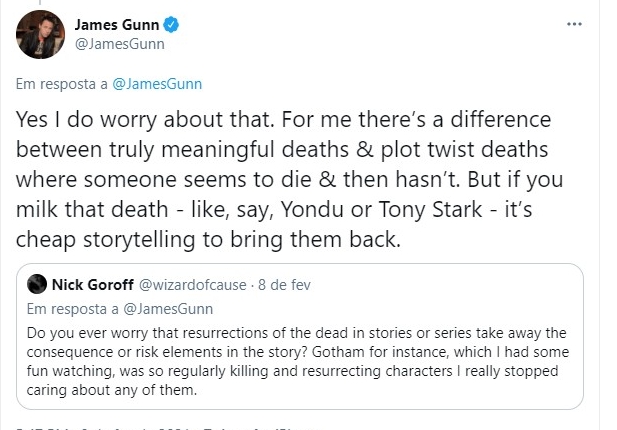 Sadly, the response may have been a cold shower for those who still want Yondu (Michael Rooker) to return, but Gunn’s statement leaves the character’s death final.

It’s worth remembering that the next chapter in the trilogy doesn’t have a preview yet, but it’s speculated that the sequel won’t hit theaters until 2023.

According to Murphy’s Multiverse, the feature will go into production in the second half of 2021, in the UK. The place was already used in the first film of the saga.

A few months ago, Gunn revealed to Comic Book that the sequel will be Rocket’s farewell to the big screen.

remembering that he is the only member of the Guardians who has not yet died in any way. Groot sacrificed himself for the team, Gamora was killed by Thanos, and the other members “ died ” at the villain’s slam.