Gwyneth Paltrow attacks again! This time a fan asked the actress if she had seen the “Hawk Hawk” series, but her response was startling – and somewhat hilarious.

“No, what is it?” Paltrow replied, clarifying that he has no idea who he played with in the “Avengers” franchise. 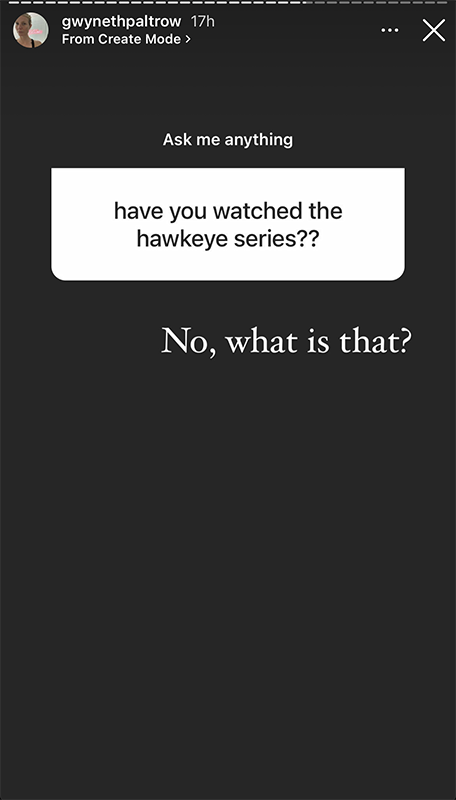 This is not the first time that the actress has forgotten something related to the MCU. In 2019, while talking to his friend Jon Favreau on ‘The Chef Show’, Paltrow couldn’t remember being in the movie ‘Spider-Man: Back Home’. She later explained that she was confused, thinking the scene was part of an “Avengers” movie.

According to the actor, he must have performed three times for the actress before she could remember who he was.

In an interview on The Jess Cagle Show, he clarified the perrengue.

“We were together at a fashion event. She stayed still next to me and I tried to hold on. I’m not like this guy who loves people and thinks, “Hey! How are you? Remember me?.’ It just doesn’t feel right. “

But then a friend who was accompanying him noticed Paltrow and pointed out that they should meet, as they both appeared in “Avengers: Endless War” and “Ultimatum.”

“I had to play for her a third time. I was ashamed, “he concluded.

While this story is hilarious, it’s completely understandable that with the huge number of people on the set of the last two “Avengers” movies, Paltrow may have struggled to keep up with everyone involved.

The full reunion of the characters in the MCU truly took place at Tony Stark’s funeral. And according to Marvel Studios President Kevin Feige, the scene in question required enormous logistics, even offering unexpected situations.

In an interview with UK magazine Empire, Feige commented that the scene titled “The Wedding” (in order to shake up the press and fans) was shot before some of the MCU’s solo films, causing some confusion among the cast.

While Tom Holland was surprised to bump into Michelle Pfeiffer on set, actress Gwyneth Paltrow took it a step further and was once again bewildered by the MCU, forgetting that Samuel L. Jackson was part of the shared universe.

“Gwyneth Paltrow kept asking why Sam Jackson was there on set. And the other cast were excited, saying, ‘What are you talking about? It’s Nick Fury! You’ve done movies with him before!’ “.