Those who only know MTV today may never be able to understand the movement that brought about the first almost 24-hour music-centric television channel. MTV’s style of being was almost a philosophy for people. young, he dictated many trends and shaped the way teens of the day spoke, dressed and thought. Other than that, it was a testament to rebellion, to be cool, and it was the first contact many young people of the time had with their favorite musical artists and the music video world.

It all started in the 1980s (and could it be another?), Where the channel helped launch artists like Madonna, for example. With the move into the 1990s, new musical styles arrived and the world scene changed. The 2000s brought even more news, on top of the fateful and final decade of MTV operation when the oldies learned about it and how, deep down, they wanted it to continue. But hey, three decades is a long time and nothing lasts forever. Today, the channel is based on reality TV shows, mainly focusing on romantic relationships (or flirting) and the lives of young people – which has always been at the center of the business. It turns out that with the advent of the internet and the online world, no one else needed to turn to a TV channel to watch and listen to their favorite music videos. And with the rise of smartphones, videos can be watched from anywhere.

In the 1990s, that’s when MTV took an even more ambitious step. In addition to music programs, music videos and its own awards, the channel has also invested in original programs, mainly animation, like Beavis and Butt-Head and Aeon Flux. And in the mid-90s, MTV Productions made their big screen debut with their first production. For the distribution of its upcoming films, MTV has teamed up with one of Hollywood’s biggest studios, Paramount. However, when it was time to take his first steps in theaters, the studio’s partner was Warner. It was the home of the DC heroes who agreed to release the musical Joe and the Cockroaches on July 26, 1996. 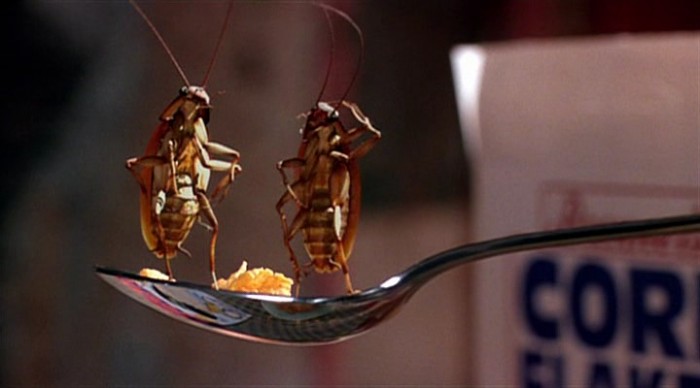 The stars of MTV’s first film production are cockroaches generated by computer effects.

Yes, of course for a first feature film in theaters, MTV Films had to choose a subversive, funny, modern, cool, musical and… why not, grotesque project. In this way, his first production for the big screen used as protagonists… cockroaches. The bugs that repel all humans and can be considered scarier than most horror movie psychopaths to many, is the subject of Joe and the Cockroaches, a short film born in 1992, written and directed by John Payson. This short, no less, featured a lot on MTV used to fill the space between its shows during commercials – since the short was less than 4 minutes long.

Four years later, Payson gets the green light from the channel, funded by his film production company, to transform his little story into a 1h20 feature film. After all, it’s still the story of a guy living in a cockroach-infested apartment and the young man’s relationship with the bugs – in other words, there was no way beyond that. In the film, Payson creates an origin story for Joe, the owner of the apartment. Now the guy was a compatriot, coming from a rural town in the United States to the Big Apple, New York, in pursuit of his dreams. As soon as he arrives, showing that life in the big city is tough, the guy is robbed three times and runs out of money and property. Despite everything, he needs to find a place to live, which turns out to be impossible.

Joe ends up, by chance, “inheriting” the apartment of an elderly immigrant lady, who dies right in front of him on the street. Coincidentally, two criminals were being paid to evacuate the last residents of the dilapidated building, working for an unscrupulous real estate contractor, to build a new part of town. A plot borrowed from Steven Spielberg’s cult classic from the 1980s, The Miracle Came from Space (1987). So Joe moves in and couldn’t be happier to have a roof over his head. Or almost, since the place is a pigsty just waiting to collapse. There, he will learn and begin a love-hate relationship with the real tenants of the property, a large group of cockroaches who talk, sing and dance.

There’s no denying that the biggest draw to Joe and the Cockroaches are the computer-generated visual effects (CGI) that create and bring artists’ insects to life. That’s the whole motto of the movie, and the story wouldn’t work if the little creatures weren’t credibly created. By this time, visual effects were making great strides in their infancy, and the advance had started with some terrific blockbusters see Terminator 2 (1991) and Jurassic Park (1993). And then came films like O Máskara (1994), for example. In 1996 we already had films like Twister, with a heavy use of effects of this size, and also Independence Day. The Joe and the Cockroaches Effects were created by Blue Sky Studios, supervised by Chris Wedge, and used the same graphics effects engine. than those created in The Terminator 2 and Jurassic Park aforementioned, to feel the level of engagement. Despite this, the film didn’t have a big budget, with $ 13 million spent on production, a small amount by Hollywood standards – much of which had to be spent on effects, as the film didn’t. big names. 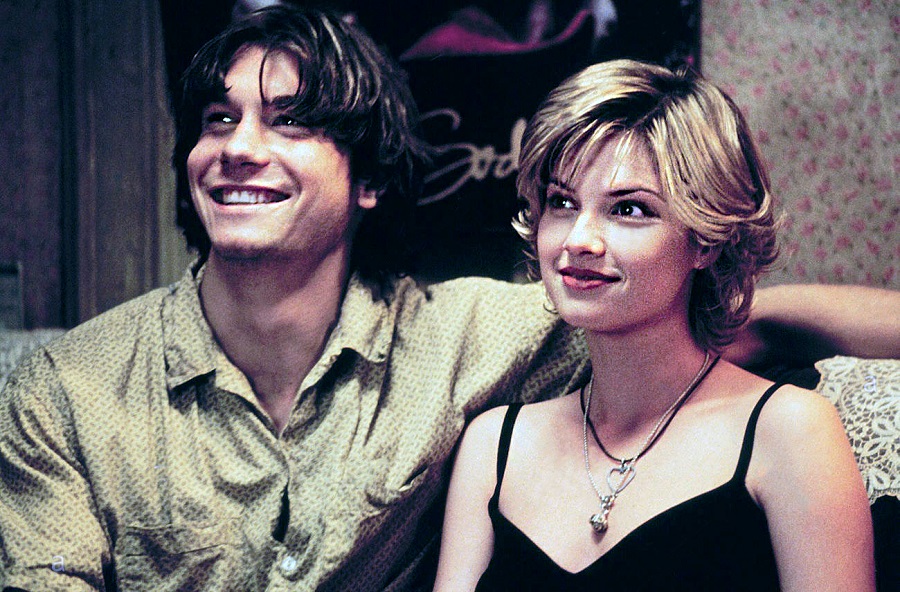 Promising youngsters of the 90s, Jerry O’Connell and Megan Ward are the human protagonists of “Joe and the Cockroaches”.

Still, faces that young audiences would know from other productions were needed, even if those faces weren’t A-Team actors. That way the performers in the short didn’t return to their roles. Mark Rosenthal, the Joe in the short, was replaced by Jerry O’Connell, child star of Conta Comigo (1986), who had grown up, became an idol and starred in the cult series Sliders at the time, being appeared the year before this feature. . O’Connell would play a leading role in the horror Scream 2, released the following year. The guy’s companion has also changed his face, in the short-lived Arija Bareikis. In the movie version, she gets a name, Lily, and Megan Ward forms. The actress may currently find herself ostracized, but in the 1990s she found success in young productions such as The California Man (1992), starring Brendan Fraser, PCU – A Very Animal University (1994), and even starred in the fantasy and fictional series. dark sky scientist.

Some of the ideas and scenes are recreated from short to feature film, like when Joe takes Lily on a romantic date at his house, fearing the worst, even after making a deal with the cockroaches. Insects, on the other hand, help in their own way to make everything go as smoothly as possible. However, the outcome is disastrous, with a real “rain of cucarachas” on the young girl. 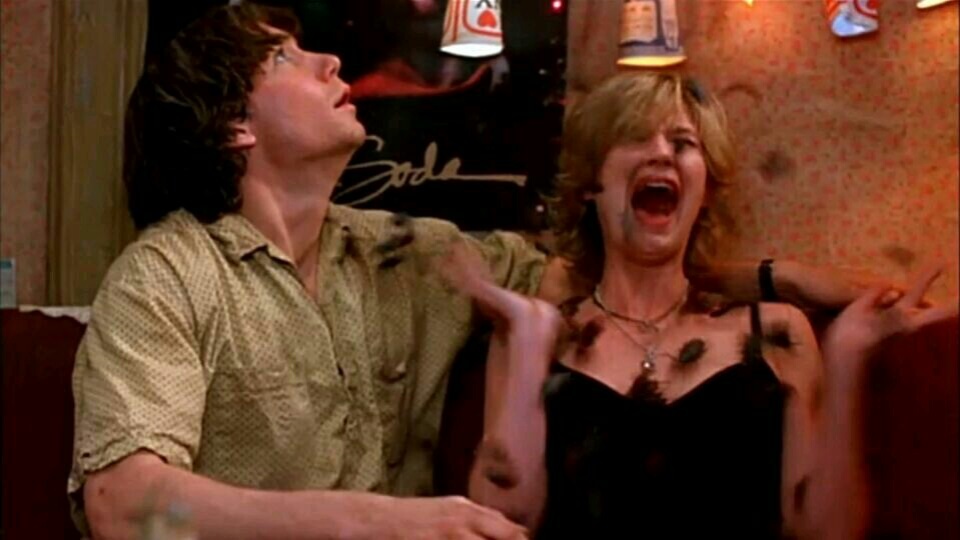 For many, a worse moment than facing Jason or Freddy: the cockroach shower that marks both short and long.

This being a partnership with Warner, another production company often associated with the big studio in the 1980s and 1990s helped financially: Geffen Pictures, the film part of the music production company Geffen, founded by David Geffen. After all, with the music in common, everything was at home. Actor Griffin Dunne also produced the feature film, from the 1980s classic An American Werewolf in London (1981) and After Hours (1985), by Martin Scorsese. Also in the MTV atmosphere, musical artists like Moby and Pepa, from the duo Salt n Pepa, were in the spotlight. And among the supporting cockroaches voice actors, actors like Dave Chappelle, Tim Blake Nelson and BD Wong.

MTV Films wouldn’t start its big screen journey on the right foot. The entirely video-clip language film, designed to be addressed exclusively to fans of the TV channel, became a failure of critics and audiences alike. Out of its $ 13 million budget, the feature only recouped $ 4.6 million from its time on the big screen. After this first failure, John Payson moved away from the entertainment world and never did anything important again. MTV Films, on the other hand, would recover from the success in its next release, which would arrive at the end of the same year, with the first and only theatrical film from house duo Beavis and Butt-Head Blast America. Three years later, the studio released a cult gem with Election (1999), starring Reese Witherspoon and Matthew Broderick.

Those who grew up in the late 1990s and early 2000s may remember showing this film on SBT nights. In 2021, Joe and the Cockroaches completed 25 years of its theatrical release. A life. Having reappeared as a cult item in the age of video rental. Failure or cult success, Joe and the Cockroaches will always carry the fact that it was the first film released by MTV and that his name is written in the history of an entire generation.