When the fans want it, they work really hard and DC fans are the most diligent.

The hashtag #RestoreTheSnyderVerse reached 1.5 million tweets in less than 24 hours and broke a new record.

The move overtook previous record holders, who released the Avengers trailer with #AvengersEndgame taking 1.4 million and #ReleaseTheSnyderCut – with 1 million.

This is a new social media record, asking Warner to rehire Zack Snyder to lead the DC Universe.

Thus, the hashtag becomes the largest in movie theater history to date and shows the audience’s interest in continuing to see the stories made by the director. Will Warner listen again? 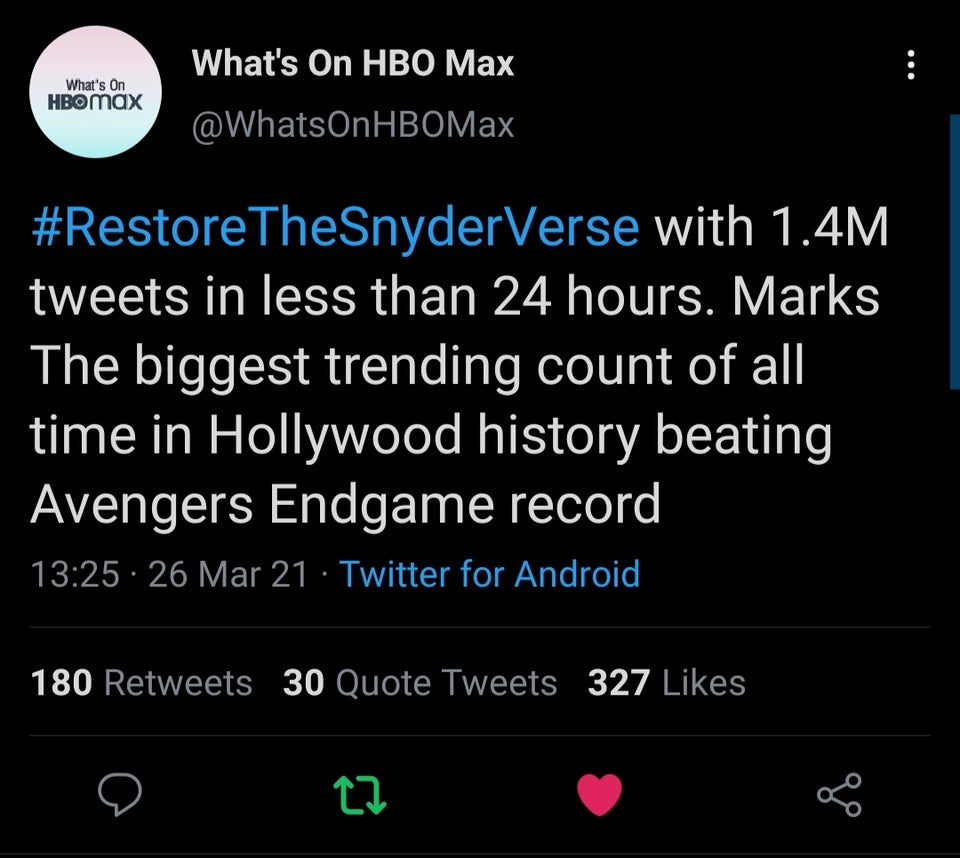 The hashtag #RestoreTheSnyderVerse continues to rock:

#RestoreTheSnyderVerse is trending worldwide with over a million tweets after the success of #ZackSnydersJusticeLeague pic.twitter.com/TS2KO27It4

Will Warner and DC now attempt to restore the cinematic universe created by Snyder, which began with ‘The Man of Steel’, ‘Batman vs Superman’ and ended with ‘Justice League’ ?

The studio must now analyze whether to listen to fans again or continue with the projects created without Snyder’s presence.

Check out the fans’ reactions:

#RestoreTheSnyderVerse to see what Zack Snyder has planned for the DC Universe! pic.twitter.com/sNzFZX27ou

My friends, this battle will be difficult but with faith we will be victorious !! # RestoreTheSnyderVerse pic.twitter.com/hVTvoOifbO

What we want from #RestoreTheSnyderVerse:

Have we forgotten something? pic.twitter.com/owhAsqhvR5

-They will confirm the second that I know
– What makes you so sure? #RestoreTheSnyderVerse #SnyderCut #ZackSnyderJusticeLeague pic.twitter.com/IMa8j7Hp5M

Want the #RestoreTheSnyderVerse just to see more of Knightmare ??

✨We’ve managed to do the impossible already, and let’s start over, #SnyderCut has come out and left an open ending for a sequel, we want Warner to do the Justice League sequel and consider Snyder’s version to be the official version. #RestoreTheSnyderVerse pic .twitter.com / VbVbNwLn78

Let’s make some noise until the sequences happen # RestoreTheSnyderVerse https://t.co/c2EkVewxrd

Snydercut is a movie that learned from Batman vs Superman mistakes
That it was a dark movie no kidding at all, but this movie makes you laugh in multiple scenes
More remains a dark film,
And I like it! Like other fans #SnyderCut #RestoreTheSnyderVerse pic.twitter.com/TqAf5XHEGk

I just watched #ZackSnydersJusticeLeague and I’m IN SHOCK. Oh my God. It was everything I expected and at the same time it was completely different from what I expected. I can’t even reason correctly yet. HBOMax urgently needs #RestoreTheSnyderVerse pic.twitter.com/tDh8hoN6zg

Last year I said after 3 years I wouldn’t bother Warner asking for something /////// I joined the campaign to restore Snyder’s universe !!!
#RestoreTheSnyderVerse #SnyderCut pic.twitter.com/cQI6lgWJaI

We won the fight but not the war #RestoreTheSnyderVerse #SnyderCut pic.twitter.com/WsuD8u0SWH

Do you think the studio should comply with the request or move on?

In Zack Snyder’s ‘Justice League’, determined to ensure that Superman’s (Henry Cavill) final sacrifice is not in vain, Bruce Wayne (Ben Affleck) teams up with Diana Prince (Gal Gadot) with the intention of recruit a team of metahumans to protect. the world facing an imminent threat of catastrophic proportions. The task is more difficult than Bruce imagined, as each of the recruits must face off against demons from their own past to transcend what stood in their way, allowing them to unite and form an unprecedented league of heroes. Now united, Batman (Affleck), Wonder Woman (Gadot), Aquaman (Jason Momoa), Cyborg (Ray Fisher) and The Flash (Ezra Miller) may be too late to save the planet from Steppenwolf, DeSaad and Darkseid and their terrible intentions. “.