Creator and showrunner Jordan Blum posted on Twitter the official titles of Season 1 of ‘MODOK,’ a stop-motion series produced between Hulu and Marvel Television. 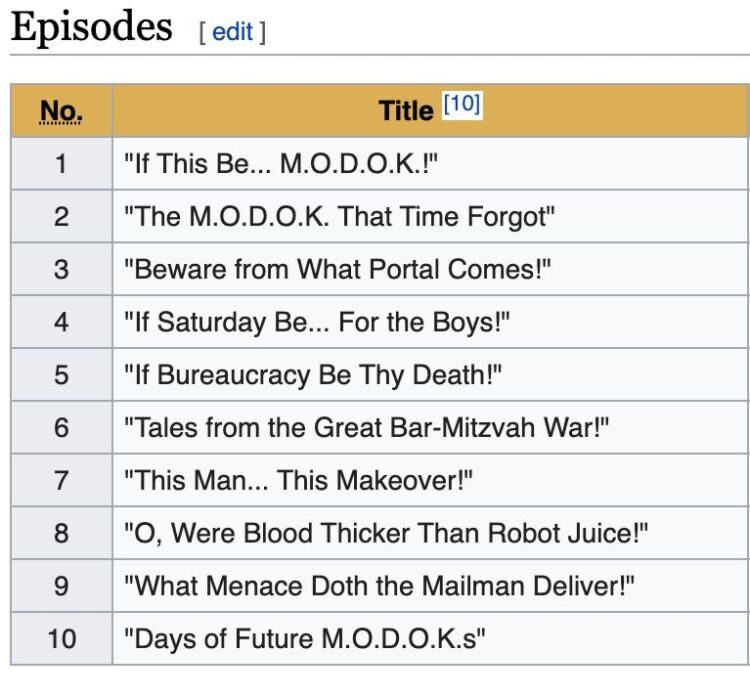 The series will premiere on May 21.

Check out the synopsis of the first two chapters:

Episode 01 × 01: “If This Be… MODOK” (written by Jordan Blum & Patton Oswalt; directed by Eric Towner & Alex Kramer) – Supervillain MODOK drives his evil organization, AIM, to ruin, and is forced to sell it to the GRUMBL technology company. As the megalomaniac villain struggles to regain control of his creation, he risks losing something even more important … his family!

Episode 01 × 02: “The MODOK That Time Has Forgotten” (Written by Geoff Barbanell & Itai Grunfeld; Directed by Eric Towner & Alex Kramer) – In an effort to win back his wife, Jodie, MODOK takes him on a journey through time for a Third Eye Blind concert they missed years ago. They are attacked by a colleague from MODOK, who steals the time machine and imprisons them in the past.

Read the full synopsis below:

The megalomaniac MODOK has long sought to conquer the world. But after years of twists and turns and failures to fight off Earth’s Mightiest Heroes, MODOK ended up bringing his evil organization AIM to ruin. Disengaged as his boss while facing a broken marriage and fluctuating family life, the villain now faces his biggest challenge yet: a midlife crisis.

Discover the official distribution of the production:

Patton Oswalt as MODOK – After being demoted by his secret evil organization and family, the super-villain must reinvent himself if he is to have the chance to regain the things he once had in his life, in addition to conquer the world. MODOK discovers that superheroes are nothing compared to their new challenge: the midlife crisis.

Aimee Garcia as Jodie – Jodie is the wife of MODOK and the hand of her children, but she wakes up late and decides to continue her career as a mother blogger, finding out that she is an independent woman. There is a lot to do in this world and little time to waste being carried away by negativity. And unfortunately the reason for this negativity is… MODOK

Ben Schwartz as Lou – To be honest MODOK doesn’t understand his twelve year old son Lou. He is not athletic enough to be a player; he’s not too smart to be a nerd; Lou is … well, Lou – a kid who clearly walks to the beat of his own music. The young man’s lack of ambition, friends, and hygiene are a constant concern for the super-villain, who ends up projecting his insecurities onto the overconfident son.

Melissa Fumero as Melissa – Despite her father’s “characteristics”, Seventeen-year-old Melissa has become something of a “Queen B” in her school and a star in the skate world. Every popular child wants to either go out with her or avoid her. But in the midst of so much success, Melissa secretly longs for her father’s approval.

Wendi McLendon-Covey as Monica Rappaccini – Monica is a mad and brilliant scientist from rival company MODOK. Clearly more knowledgeable and skilled than the super-villain, Monica is amused by MODOK’s sufferings until the new management begins to encroach on her experiences – which leads her to unite with her former nemesis.

Beck Bennet as Austin Van Der Sleet – After the MODOK organization is all but destroyed, he is forced to sell it to tech giant GRUMBL. The company, in turn, turns Austin into the new boss of MODOK, and as much as he wants to disintegrate him with a snap of his fingers, the villain searches for new solutions to deal with him.

Jon Daly as Super Adaptoid – An android who has ambitions to live, feel, and create, but is actually forced to spend his days massaging the scalp of MODOK, its creator. Although he intends to turn on his “boss,” Adaptoid has a troubled friendship for the villain.

Sam Richardson – Gary is an AIM henchman who is fiercely loyal to MODOK, even though he struggles to remember his name. As the super-villain continues to be demoted within his own organization, Gary stands by his side, always offering help and unbreakable optimism.