In a context where superheroes have never been hotter than they are today, the Hollywood industry is still trying to squeeze a new story wrapped in the subgenre. And Thunder Squad is Netflix’s attempt to flirt with the comic book universe in a more popular and comprehensive way, bringing the duo Ben Falcone and Melissa McCarthy back to the forefront of the project. But sadly, even the presence of Oscar-winning Octavia Spencer isn’t able to guarantee a lasting breath to this one, who joins the streaming giant’s list of low original productions. 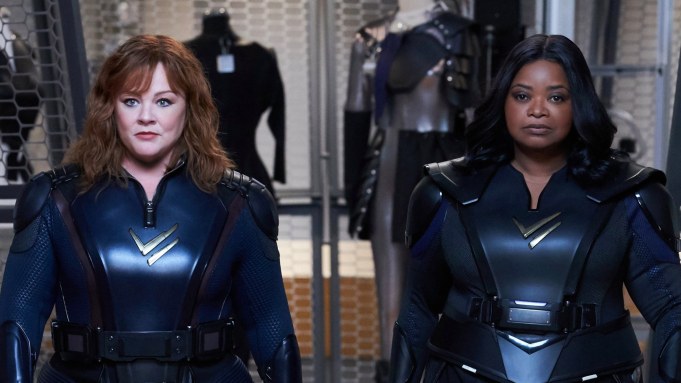 In the plot, two childhood friends reunite more than thirty years later, to fight a deadly threat from a group of villains who continue to terrorize their hometown. With very different lifestyles, they will be subjected to an experience that will guarantee them the superpowers necessary to win the peace of the residents. In particular contrast, McCarthy and Spencer attempt to give body and essence to a plot inspired by the dynamics of long cop buddies, but sadly they cannot guarantee that delicious taste of an unusual action comedy, as seen in movies like Heavy. The cop, rush hour and the lethal weapon.

But the intentions are good and Falcone – who signs the script, the directing and always makes a point in the feature film – tries to mix burlesque humor with the vicious, in order to promote laughter from simple, banal situations and more practical. However, the shots of others from his previous films don’t work so well here, causing the film to fall into limbo in its first half. With a storyline that extends overly into the introduction of its characters, Squadron Thunder mostly follows without getting those expected laughs and the overly seriousness of Spencer’s protagonist doesn’t cause the contrast initially idealized by the director.

With nearly two hours of duration, the comedy sins of not knowing how to use its screen time wisely and often skates in a small dynamic and captivating plot. Its second half tries to bring in more electrifying action scenes and the good visual effects even manage to fill the lack of humor. But even so, the film wastes its protagonists, erases Melissa Leo in such a way that we can barely perceive it, and has Jason Bateman reminiscent of the days of comedy, in a character who tries to be additional comedic relief, but we are not really interested.

With an idea that is all too common, but one that could very well have developed with more skill, the comedy-inspired comic book world is weak in its jokes and almost manages to repeat itself at times. Letting audiences see ships, Squadron Thunder puts us in anticipation of a comedy that, although it appears in its official description, forgot to show up during its near-rough hours of production.