Before Disney took control of the “Star Wars” saga, creator George Lucas planned new films set after the events of “Return of the Jedi”.

According to a Reddit user, the filmmaker recounts in the book “ Star Wars: Archives 1999 – 2005 ” that he wrote a completely different plot than that shown in “ The Force Awakens ”, directed by JJ Abrams in 2015. .

In Lucas’ sketches, Darth Maul is said to be resurrected as the main rival of the New Jedi Order created by Luke Skywalker, as well as a threat to Leia’s government after taking office as Supreme Chancellor.

Moreover, the story would even feature the character of Darth Talon as Maul’s apprentice … For those who don’t know, she is a very popular warrior among fans of the ‘Jedi Academy’ game series.

In part of the post, the user shared an image with the following description:

“Darth Maul trained a girl, Darth Talon, who appears in the comics as his apprentice. He was meant to be the new version of Darth Vader, and most of the action would be led by her. So, those would be the two main villains of the trilogy. Maul would eventually become the leader of the criminal underworld in the universe. And, as the Empire crumbled, the Sith took on new ambitions.

Throughout the text, Lucas explains that:

“By the end of the trilogy, Luke would have rebuilt much of the Jedi Doctrine and we would accompany the renewal of the New Republic, with Leia becoming the Supreme Chancellor … Then she would eventually be chosen.” 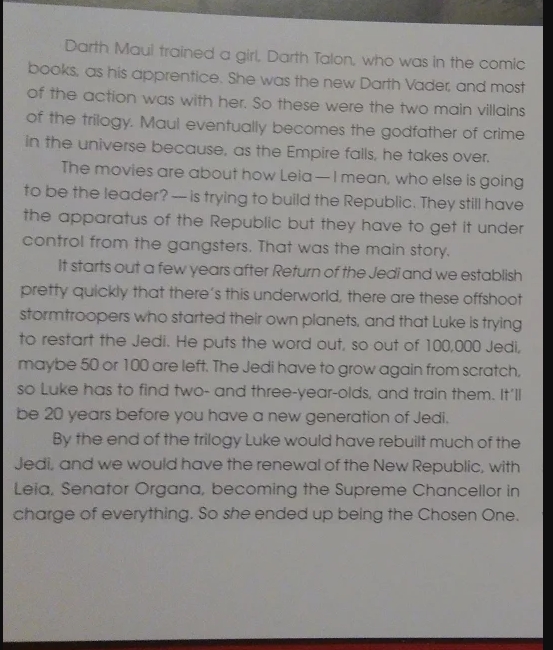 The most interesting thing is that this Maul arc was adapted by Dave Filoni in the ‘Star Wars: The Clone Wars’ animation.

So, do you think this version would be more successful than the current Disney created trilogy?

Sadly, “Star Wars: The Rise of Skywalker” ended Rey, Finn, and Poe’s story with the worst approval rating in the entire saga, scoring just 52% on Rotten Tomatoes. Just behind are “The Phantom Menace” (53%) and “The Attack of the Clones” (65%).

And you, what did you think of the outcome of the Skywalker saga?