Marvel has released the first trailer for one of the most anticipated movies in MCU history. With a stellar cast, little is known about the feature’s plot. However, with the trailer, we were able to identify a few Easter Eggs that give little clues as to how this adventure should play out. Check!

In the comics, Sersi (Gemma Chan) is portrayed as an “Eternal” who fell in love at first sight with the human race. In the trailer, when their ship arrives on Earth, the character already shows her admiration and compassion for people, despite being primitive and clearly inferior to her. So, nourishing this love, this admiration, she is the superheroine who has the most contact with people. Therefore, it is assumed that she is the protagonist of the feature. 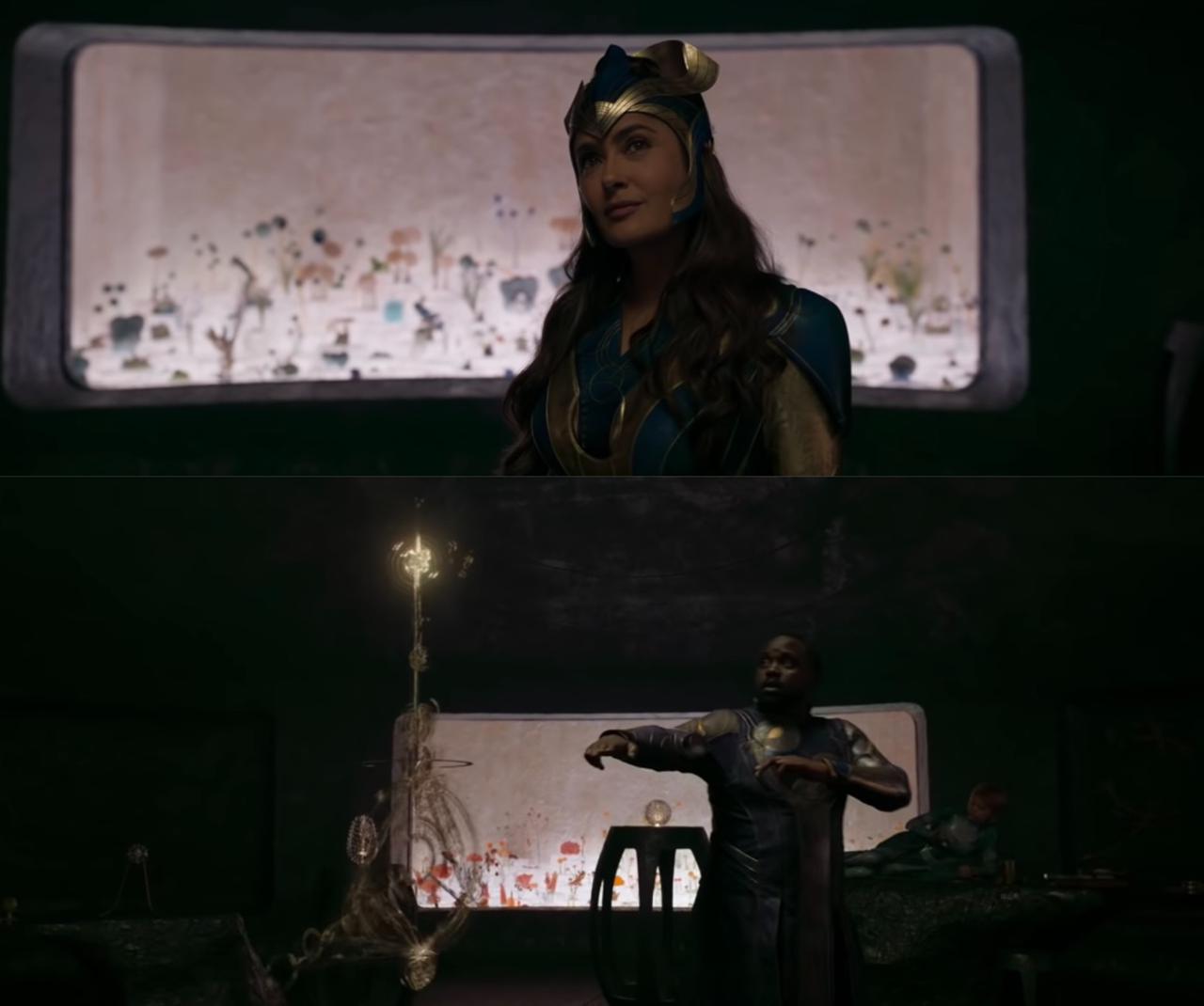 Children of the Celestials, the Eternals came to Earth to defend the planet from the threat of deviants and to exchange knowledge and experience with its inhabitants. As can be seen inside their ship, the Eternals bring with them plants and herbs (at the bottom of the image above), which leads us to believe that the film will portray the heroes teaching activities. fundamental, such as hunting and farming to start the process of civilization of the human race.

Located in Mesopotamia, Babylon is of great importance in the MCU. As well as being the place where the Book of Vishanti was made (hello, Doctor Strange!), It was in this town that Thena (Angelina Jolie) met and got involved in a controversial relationship with Deviante. Kro, what we assume to be in this movie. In the trailer, we see the heroes united in front of the city, revealing themselves to people for the entities that they are. Does this contradict the part where they claim not to “meddle” with the human race? Probably. In fact, they contradict each other all the time because what they have done the most is interventions. That is, this phrase can be said in the past, but it was used to confuse fans in this preview.

Collective consciousness isn’t exactly a new concept in the MCU. This is because we have already seen that the Kree (Captain Marvel – 2019) use this device to control their soldiers and the Infinity Jewels themselves have created a kind of mental bond between Tony Stark (Robert Downey Jr.) and Thanos. (Josh Brolin). In the comics, the Eternals are able to come together to create consciousness and a ridiculously powerful entity called Unimente. It works like a megazord that can only be formed with the presence of the Chief and at least seven Eternals.

Enemies from birth, deviants were also created by the Celestials as a type of counterpart to the Eternals. They also have special abilities and are as old as Earth life, but uglier than hitting their own mother. In the trailer, we see those weird, monstrous legs in one of the Eternals’ rare moments of conflict. Everything suggests that he is a Deviant and that they are, yes, one of the main threats in the film. It’s good to remember that the most famous Deviante is the titan Thanos.

The trailer also shows an erupting volcano. For the geography of the surroundings, we can assume that it is Vesuvius, responsible for the destruction of Pompeii during its eruption. In the “Loki” series trailer, we also see Loki (Tom Hiddleston), a time traveler, fleeing an erupting volcano in the past. It is not possible to know if there will be a link between the two productions, but it would be interesting. Another possibility is the introduction of Atlantis. The Eternals are based on Greek mythology, and in the comics Atlantis sank during the clash between an Eternal and a Deviant. The hero uses a weapon to bring Earth’s magma to the surface and prevent the villain from advancing. With this, the city sank, which would give birth to Namor, the Underwater Prince. 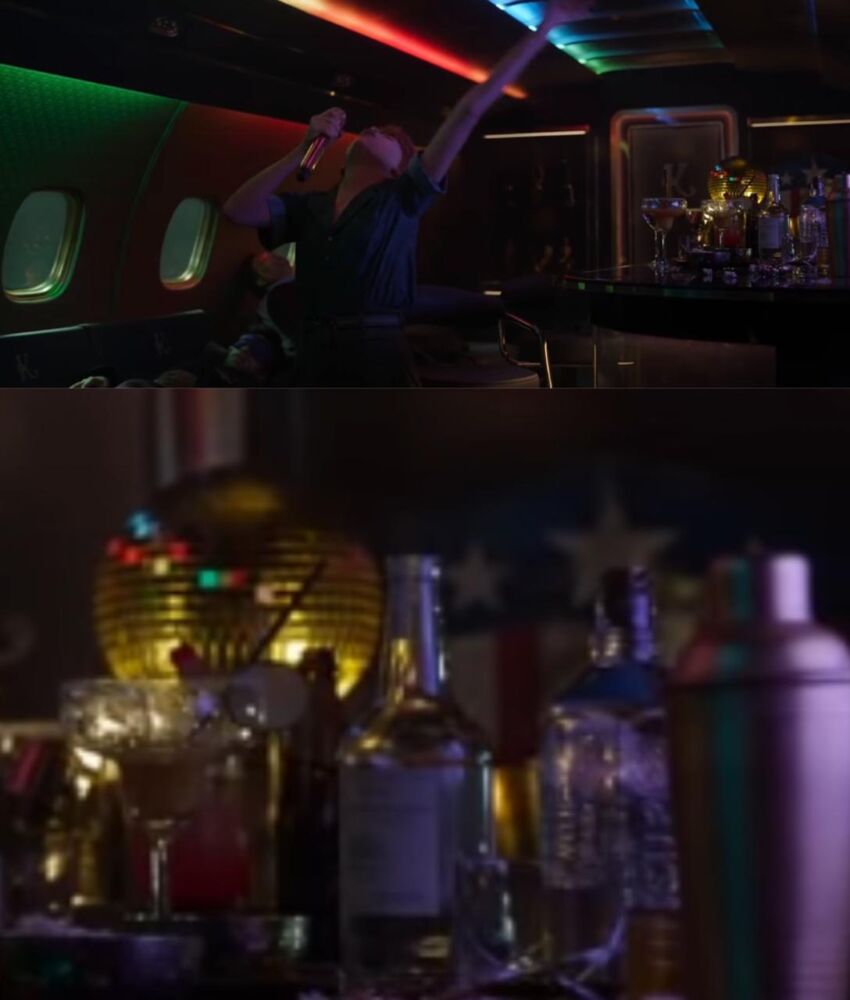 Sprite (Lia McHugh) appears in two moments referencing Captain America (Chris Evans). The first is in this scene where she appears on an airplane that carries nothing less than the Captain’s original triangular shield hanging on the wall. Later, she would quote the hero again as “Captain Rogers”, her army nickname. Since Sprite has been on Earth since the dawn of society, it wouldn’t be absurd to think that she might have experienced war stories with Steve Rogers in the 1940s. 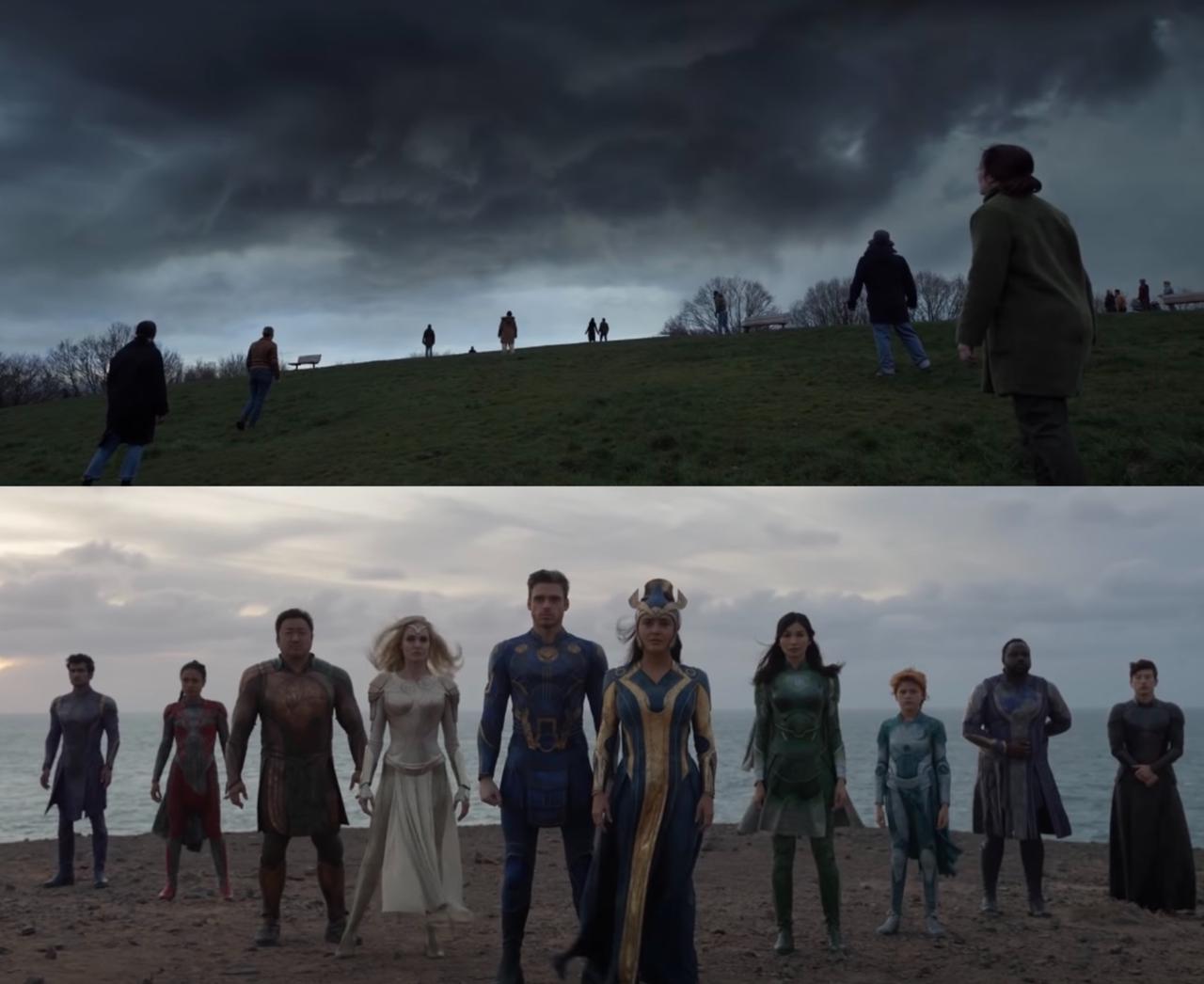 In the comics, this turn of time filled with yellow lights only indicates three things: 1- Thor is coming; 2- The storm arrives there; 3- A Celestial gets there. Since the Celestials – that race of the Ego (Kurt Russell), father of Peter Quill (Chris Pratt) – are the parents of the Eternals, they are likely to come to Earth. Do what? Well, if you follow the logic of Guardians of the Galaxy Vol. 2 (2017), they are coming to expand their domains and conquer Earth. But they might have other reasons, like reminding the Eternals of their fundamental role in the development of the planet and so forth.

One of the Eternals’ most intense plots in the comics involves a case of betrayal and conflict that pits one Eternal against the other and the Losers are banished to space. Ikaris (Richard Madden) takes up a lot of space in the trailer and becomes a joke when he says he could lead the Avengers. This may indicate that he will take on the role of leader of the Eternals or, contrary to all expectations, he may rebel against the heroes, becoming the big bad of the plot. Ah, Druig (Barry Keoghan) is another Eternal who has plenty of signs of showing himself as a threat.

Regardless, the trailer was very interesting and brought in a more subdued tone that is not so common in the MCU. Everything indicates that we will have the first act set in different periods of the human past, but we will see many scenes in the present, showing the Eternals as people hidden in today’s society. The villains must be deviants, but we may have some surprise in the final threat. Ah, we’ll also have a love triangle that can rock structures, bringing an element of romance to the Marvel Cinematic Universe.