When fighter Sasha Banks was announced as part of the cast for Season 2 of ‘The Mandalorian’, many fans bet she could bring Sabine Wren to life.

For those who don’t know her, Wren is a Mandalorian who joins the rebel assault on Imperial forces in the “Star Wars: Rebels” animation.

One of her most striking features is her colored hair, as well as that of Banks, which is why so many comparisons have popped up.

However, the most recent episode shattered fans’ hopes by showing Banks as an anonymous Mandalorian, unrelated to Sabine Wren.

It is introduced when Din Djrin (Pedro Pascal) and Baby Yoda are attacked by aliens Quarren, until they are saved by three Mandalorians.

After Mando sits down with Baby Yoda, the three reveal their faces and are accused of fake Mandalorians, as warrior culture prevents them from removing their helmets.

This is where Banks is revealed in the left corner, alongside Bo-Katan Kryze, played by Kate Sackhoff, who also voices the character in “ Star Wars: The Clone Wars ” and “ Rebels. ”

While Banks’ character has not revealed her identity, she is unlikely to be Sabine Wren, as the show’s creators wouldn’t ignore her most striking physical trait. 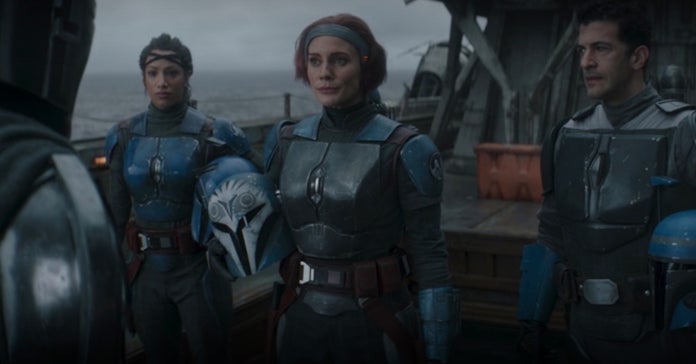