“The Suicide Squad” is one of the most anticipated superhero films of the year, as well as the first DC Comics adaptation since the release of the Snyder Cut of “Justice League”.

With that in mind, a Twitter user asked director James Gunn if the antihero team’s new film would contain the infamous post-credits scenes.

And, to the public’s delight, Gunn confirmed it with a positive response.

“Hey James, here’s the most important question ever, ‘Does the Suicide Squad have any post-credits scenes?” The fan asked.

“I hope that’s not the most important question, because I think the movie itself is what matters most, but yes.” 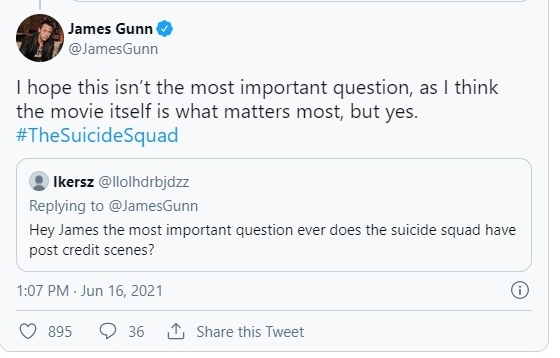 Recalling that the film received an indicative adult rating (R), due to “extreme violence, bloody scenes, language, sexual references, drug use and brief graphic nudity”, and will run for 2 hours and 12 minutes.

“The Suicide Squad” hits nationwide theaters on August 5, the day before the US premiere.